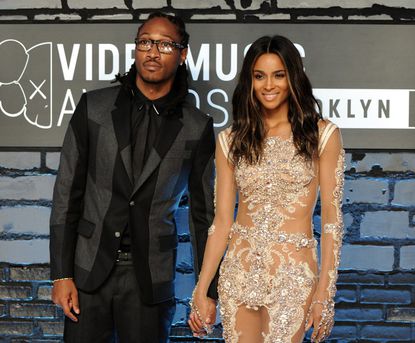 Recap: In a round of tweets earlier this month, Future took to Twitter to express what could be his frustration with his current co-parenting situation with Ciara. The tweets went as such:

“This bytch got control problems…”
“I gotta go through lawyers to see babyfuture… the f*ckery for 15k a month”
“I just want babyfuture that’s all”
“I been silent for a year & a half… I ran outta patience”
Future and Ciara announced that they were dating some time in 2012… A year later, Future proposed to Ciara at her 28th birthday party and was quoted saying:
” I’ve reached an age in my life when it’s time to settle down.”
“You got one life to live. So I’m living it the way I want to live it.”
… In 2014 shyt began to get ugly with rumors swirling of Future cheating. In the midst of it all, Ciara gave birth to her son, Future Zahir Wilburn on May 19th, 2014. Afterward things seem to continue to go down hill with the couple splitting quietly some time during the year. Fast forward to 2016 and we are witnessing a seemingly happy Ciara (dating Russell Wilson), and a seemingly unhappy Future.
Analysis: What saddens me the most about this situation is the lack of respect being shown here. I personally do not feel that it is ever ok to disrespect your ex-significant other and most definitely not someone that you are parenting a child with. We are living in an era where no one wants to be held accountable for their own actions. Ok, the two dated and produced a child, now… how in the hell do you get to the point of hating each others guts when it was all love less than two years ago?
Yes, sometimes we date who we think we want, not who we need… With that being said, you may catch a bad one here and there, but whose fault is that? You chose that person, no one else. You could have very well judged poorly, we all do sometimes, but the thing about life is… it will force you to deal with those decisions. For every action there is a reaction… Every decision that we make warrants a consequence or reward. There is no way around that law.
The biggest hurdle now is how to move forward, which is something that you have to do. As parents, we can be soooo selfish at times… Dragging one another’s name through the mud just for a few like and a couple shares. We often forget who will be impacted the most… the CHILD. The innocent being who did not ask to be on this earth, but is now wedged between some dysfunctional relationship of two adults who are not behaving as such. I respect Ciara though because through it all, she hasn’t responded much, and when she does, it’s not in a negative way. When a situation gets as messy as this one you have to question, are there feelings still lingering? Future has mentioned Ciara in many interviews and social media posts (and not in the best way). Could he still be in love with the goodies of the R&B singer? I think that could very well be the case. However, we will probably never know since the ego seems to be controlling this ship.
Take away: Be cordial and respectful, if for no one else do it for your child. Believe it or not, the baby is watching. When the day comes where he/she can speak and make their own decisions, they will be sure to blame you for all of their personal issues stemming from growing up with dysfunctional parents and social media won’t be able to console that… You can hold yourself accountable in your own home without worrying about the public judging you. Take the step towards adulthood and sacrifice your ego for your child…